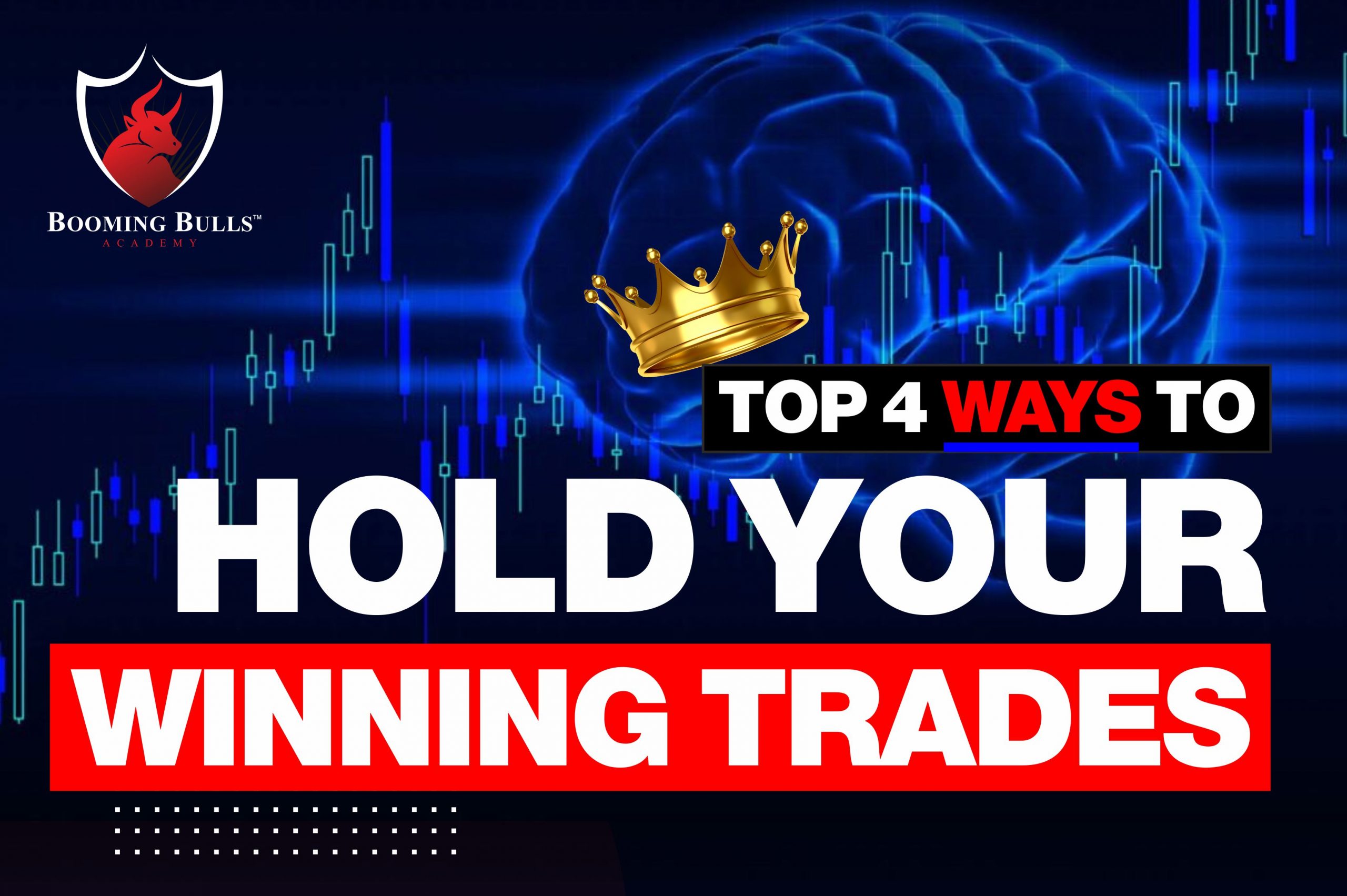 Exiting winning trades before hitting the targets is the common problem that many traders face and to tackle this problem, here we are going to discuss the top 4 ways to hold your winning trades.

In markets, fear builds up quicker than greed, and that is why traders or investors book their profits due to the fear of losing profits. It’s the basic tendency of human psychology and one of the most difficult trading mistakes to overcome. If you analyse your past trades, you will notice the number of times you have exited a trade manually for either a small win or a small loss, and then the next day, you regret exiting that trade.

This article intends to help those traders who are unable to hold their winning trade. There are a number of contributing factors because of which traders exit the trades early. It may be due to lack of discipline, recency bias, improper trading system, etc.

Now, we will discuss some solutions to these problems.

·Follow the right trading process and try to understand the market structure.

This is the most simple and effective way to hold the winning trades. An important reason behind exiting the trade too early is many traders don’t know what they are actually doing.

For example, if you are constantly looking at the fluctuations of your PnL whenever you are in a trade, then you are probably going to end up exiting that trade too early. Also, many traders close their positions due to small pullbacks of the market thinking that this would be a reversal. This happens because they fail to understand the market. Always remember, if you want to hunt big targets, then you have to wait more.

It is important to note that every time it’s not possible to achieve big targets in a single red or green candle, there will be certain pullbacks, and that is how the market structure works. Instead of exiting the trades at pullback, you should add more quantity to gain more profits, but remember: always add quantities to winning trades and not losing ones.

Most of the time, traders are overly influenced by recency bias. Recency Bias is a psychological phenomenon which states that our most recent experiences have more of an effect on our behavior than older experiences do. When recent bad experiences over- influence trader’s minds, then their approach becomes more defensive.

·Work on your psychology

As we all know psychology plays a significant role in trading. Even if you are a master of technical analysis, you can’t beat the competition without working on your psychology. Your trading system can give you entry, stop-loss, and target levels, but your psychology will decide for how long you can hold that particular trade with conviction.

Not having the right trading psychology is something that will definitely contribute to exiting trades too early. Many people come into the market (some of them quit their jobs) thinking that they will make tons of money within a short period of time. But the reality is only 10% of the traders make money in the market, and if you want to be in that 10%, you have to be disciplined and more patient than the rest.

You should accept that the more you try to make quick money, the more quickly you lose money. Trading success is all about being consistent over a long period of time, and that consistency comes from the right psychology. Once you accept this fact, you will be closer to your dream of becoming a successful trader.

Many traders think that if things go in their favor, it’s their great analysis and skill. If things go against them, it’s bad luck/operator/manipulation. Getting over this type of delusional thought process is important for sustainable existence in the market.

Believe it or not, your thought process plays a significant role in your trade exits. Suppose you are a negative type of person, and if you are unable to believe that no one can make money from trading, then it will be hard for you to hold your winning trades run because whenever you are in a small profit then your thought process will influence your mind and you will automatically start thinking that no one can make money from trading and so do I. That is why I will close my position now because no one knows what will happen next.

Winning these types of inner battles is very much important for sustainable development in the market.

I have committed many mistakes as a trader when I was a beginner. There is no problem in committing the mistake, but how fast you learn from it and correct that mistake plays a significant role in your overall success.

From many experiences, I have learned that a trading system alone is not important for holding your winning trades. Along with a quantified trading system, having the right psychology is equally important to hold your winning trades. Hence, In my Booming Bulls Elite Trader Mentorship Program 2.0, I don’t just provide my students a trading system, that is not enough on its own; I also convey to them the role of the right trading psychology for sustainable growth as a trader.

At the end of this article, I would like to tell you that if you are a directional trader, then it’s very much important for you to take high probability trades where you win one-half of your battle. The other half of the battle is won by holding your trades as long as you can to increase your win size.