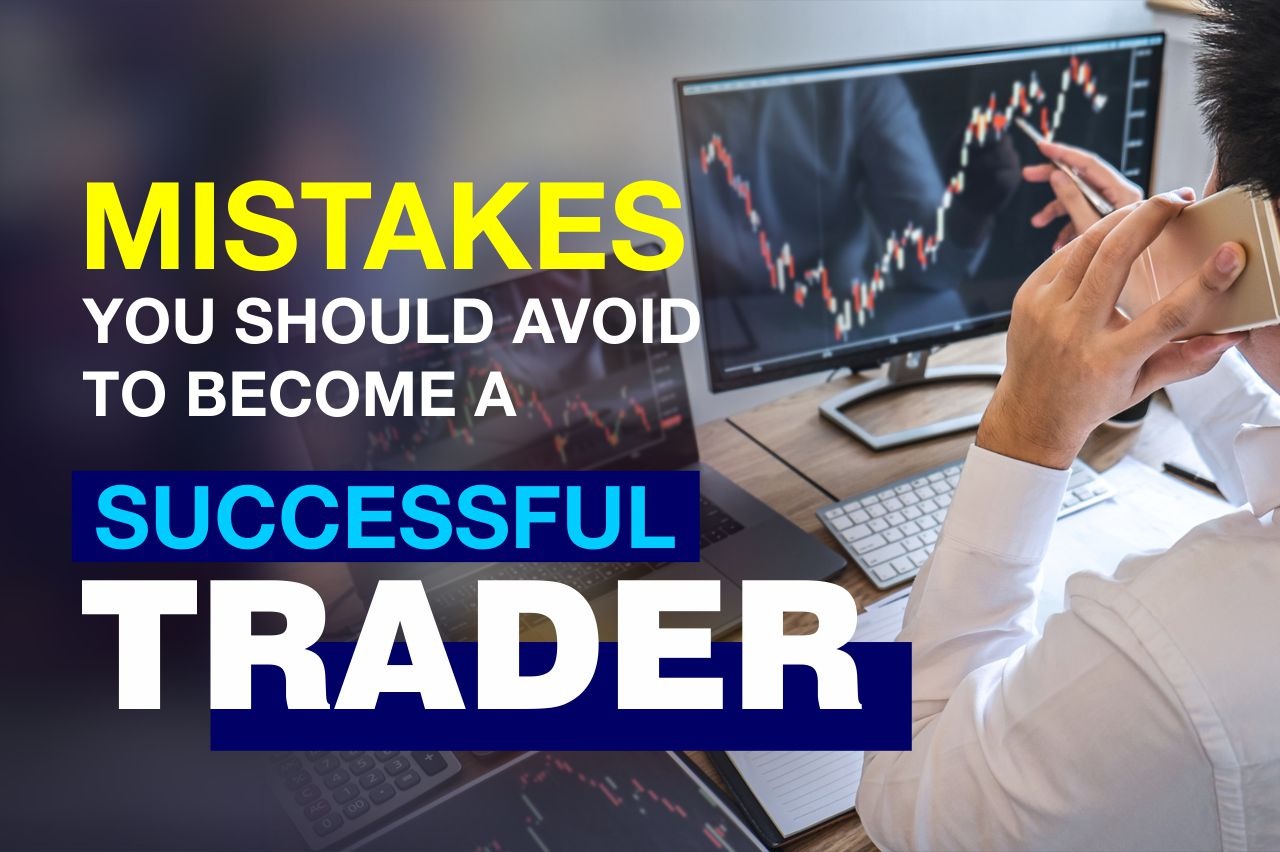 Do you want to become a successful trader? Well, for that you have to avoid many common mistakes that traders often make. As you learn to trade you are going to make some mistakes, but your success depends upon how early you realize your mistake and find a way to overcome it. In this article, I am going to discuss the most common mistakes that traders make and also solutions to those mistakes to become a successful trader.

This is the worst possible mistake that a trader could ever make. But unfortunately, some amateur traders commit this mistake. In the beginning, traders are not familiar with the working of the account. As a result, they end up making errors such as not placing a stop loss properly or risking more money, etc. Thus, they end up damaging their account and eventually losing a lot of money. Hence, initially, you must practice trading in your demo account once you get familiar with all the things then you can trade with your real money.

Also, a demo account helps you to back test your strategy which is very important before using it in live markets. For becoming a successful trader your goal should be to back test every strategy on a demo trading account and your ability to trade it. So that you can trade with that strategy in live markets confidently.

This is the most common mistake that every amateur trader makes. About 90% of the traders end up on the losing side over the long-run when they are carrying out multiple trades simultaneously. Another interesting fact that you should know is if you have taken more than one trade at a time you are probably trading too much. It is illogical to be in more than one trade at any point of time if you are a beginner in trading.

Many amateur traders tend to overtrade because of many reasons like some traders want to recover their losses and some traders use trading systems without back-testing them. But the truth is unless you learn to control your emotions and stop over-trading, you are not going to be profitable in the long run.

Now if we talk about the solutions to these problems, the simplest solution is the realization of the fact that “you can make more money by taking less trades”. By realizing this fact, you may begin to think that why a particular trade might not go in your favour instead of trying to find every single reason behind taking every trade.

● Listening to news while trading

Trading based on the news is the reason because of which many traders blow up their trading account. What happens is that traders go on the internet and start surfing the news related to trading or the financial world then they find some good or bad news about one particular stock and they try to trade that stock based on their opinions with heavy quantities and end up losing all the money. This happens because that news had already impacted the price of that particular stock before it came out.

● Not considering the worst-case scenario

This error is related to trading psychology. Before taking any trade, you have to understand that every single trade you take has about equal chances of winning or losing irrespective of which strategy or which price action concept you use. It doesn’t mean that you can’t have a strategy which is having a higher percentage of win rate it simply means that for any given series of trades there can be a random outcome and the sequence of these outcomes depends upon many factors.

Now, let’s say for example, you have a system which is having around 60% accuracy and out of the first 10 trades you lose 4 trades in a row but after these 4 losses, you could still win 60 percent of the time. If you don’t maintain your calm during this losing streak and over-trade, you will surely be causing a lot of damage to your trading account. So, always have faith in your trading system and follow it properly.

A single trade simply does not mean anything. To analyse your ability to trade and how well your edge plays out, you need to learn to manage your risk over a large series of trades. Through this way, you can see if your trading system is profitable or not.

● Feeling uncomfortable during trading and not following the trading plan.

When you enter into the trade you should hold the trade unless your predetermined stop loss or target gets hit. You should not exit the trade in-between your target and stop-loss. Often many traders analyse the market and they find an opportunity in a particular stock then they enter into the trade and after some time they realise that the price has slightly moved against their favour and then they exit the trade immediately by fear. Here you have to understand that while trading you are going to have winning trades as well as losing trades but how much you lose in your losing trade and how much you win in your winning trade that matters the most. That’s why you should follow your trading plan and you should not freak out when the market slightly moves against your favour.

● Focusing on the profits and not the process

When an amateur trader comes into the market, he wants to become a millionaire overnight. But it’s the only impossible thing in this world. You have to understand that trading is not a trick which once you learned you will earn a lot of money through trading, rather than trading is a skill which takes time to develop and for developing a certain skill you should follow the process. Traders focus too much on the profits and reward but rather than focusing on the profits you should work on your trading system, trading psychology, and risk management. Remember, profit is the outcome of your process that’s why always try to follow the process rather than focusing on profits.

● Taking a late entry into the trade.

It often happens with every trader; you analyse the market and you find a setup for entering into the trade but due to some reasons you didn’t enter into that trade. And after some time when you see that price has already taken off from your imaginary entry point, then you get frustrated and rush to enter in a trade at a market price which is a big mistake. Instead of entering the trade, you have to pass that opportunity and remember; this is not the last opportunity there will be many opportunities yet to come.

Risk per trade is the maximum bearable loss that a trader can take on a single trade. Your risk per trade defines the quantity with which you should enter the particular trade.

Many new traders neglect these technical things and they enter into the trade with heavy quantities. If you are not managing the risk and blindly entering into the trades then it is high time for you to work on your risk management and capital preservation skills.